Have we reached the ​‘smart’ tipping point?

By Adam Scott with illustrations by Matty Kapeleri

The rationale of the smart city as a means for improving, designing and building our collective urban future has reached a tipping point of acceptability.

The take-up rate among urban planners is such that we’ve returned to the age of the emperors, where it’s possible and desirable to design, build and populate a city from scratch. The most obvious example is South Korea’s Songdo, the world’s so-called smartest city.

As enamoured as we are by technological prowess, we’re in danger of losing sight of what cities are all about: the experiences of people being people.

From the perspective of the urban planner’s spreadsheet, it’s easy to see why somewhere like Songdo might appeal.

Without history, built on reclaimed land outside Seoul, it’s a ​‘year-zero’ purpose-built city. A clean, super-connected mega-sized business district that, according to its planners, borrows from the best of the world’s greatest cities.

It has its own Venetian canal system and a central park. It’s underpinned by a package of ​‘smart services’, managing everything from homes, to traffic, to health. It’s made for an environmentally sustainable community. It offers, in the words of one of its key IT providers, ​‘the ultimate lifestyle and work experience.’

But like the branded cities of old, built by kings as singular testaments to their omniscient powers, Songdo shows a fundamental misunderstanding of what makes a city.

A joint venture between American developers, South Korean constructors and local government, Songdo is a city that mistakes people for categories of user. It re-imagines the experiences of those categories – financiers, technologists, bio-pharmacists, commuters, residents, patients, relaxers – as part of a vast and predetermined system of input-output solutions, so technologically advanced that it does away with ​‘3-D’, ​‘dirty’, ​‘dangerous’ or ​‘difficult’ industries.

Largely bereft of the messiness of manufacturing and municipal service industries, and of crowds, dirt, and the organic and often anarchic growth of the street, it’s an invention dedicated to an ​‘international community’ of ​‘forward-thinking individuals and companies’.

It’s so clean – safe and predictable – as to be hyper-hygienically unnatural. It’s not home. It’s a technocrat’s dream, had in the 1950s.

Like technologists who champion the democracy of the internet, smart city advocates speak of equality of access and opportunity. They prioritise technical platforms, infrastructure, project development and information systems for thousands of projected users.

Songdo IBD (the city’s local authority) speaks of creating ​“an unparalleled quality of life as technology, resources and innovation come together to create a world class international community”.

Putting aside the moral implications of this rarefied-sounding class of desirable citizens, Songdo’s philosophy for city building begins with a fundamental absence of the human.

Cities don’t ​‘create’ communities, people form communities. As Argent St George, lead developer of King’s Cross Central, states in ​‘Principles for a Human City’ (2001): cities are where people do life. And ​‘people’ should refer to and include everyone who has an interest – past, present or future – in the city.

This is why, before deciding on a strategy, making any plans, or laying a single brick for what would become a fiendishly complex project, Argent’s chief executive Roger Madelin met with 7,500 people at 353 different meetings, which he travelled to on his bicycle.

It’s worth pausing for a moment on this image of the head of one of the world’s leading developers cycling about a rundown piece of London to listen to the experiences, views and ideas of thousands of its people.

Compare this to the people-less top of the value stack that serves as the smart strategy for the development of cities like Songdo.

Indeed, compare it with the complex stakeholder consultation process that mostly always happens today for any large-sized urban development. In a recent piece of research completed by Hassell and FreeState for an Australian waterfront development, there was a startling difference between what we imagined people wanted and what we discovered by getting out from behind our desks and asking them.

We proposed a set of positive and well-considered themes for the development’s strategic framework. But it turned out that the people who live, work and visit the waterfront precinct wanted something more subversive than we’d imagined.

For King’s Cross Central, Madelin’s 353 meetings were the evidence base for the design principles that have seen the place become – 17 years later – exactly what it set out to be. The mixed use quarter is ​‘a public piece of London’, home to two primary schools, a university, a cookery school, a mobile urban garden, 24 acres of open space, and 2,000 new homes (of which a staggering 50 per cent is affordable housing).

This from a man on a bicycle with a vision, informed by time spent listening to the very people his work would impact, maybe for the rest of their lives. Cities, lest we forget, begin with people.

The King’s Cross Central development is not a utopia. Its achievement is not in its architectural prowess – which has its critics, most notably the late Zaha Hadid. And it has very little to do with its adoption of smart technologies – which, though integrated, hardly compare to the vast digital infrastructures of Songdo.

Rather, its success is in getting the first element of its strategy very right: a focus on people from all walks of life, with an almost incomprehensibly large range of interests, needs and dreams. It has been designed for the experience of being in the city, a design that factors in the unpredictable and choreographs the unexpected.

This capacity for designing for surprise goes beyond the logic of the machine. It goes beyond the expectations of form and function. It questions the cult of efficiency.

It repurposes the physical stuff of a city as – to paraphrase the American architect Jon Jerde – the backdrop to the event that is always taking place in the space that the stuff helps create.

Thinking back to our community consultation for the proposed waterfront development, and the unexpected – even radical – views and ideas we heard. Can the ​‘smart city’ accommodate experimental, even dangerous ideas, and the ​‘shock of the outsider’? Can this approach to urban design really retain the history, local idiosyncrasies, and architectural heritage of the site?

Argent’s approach with King’s Cross Central – championing real people’s experiences over a spreadsheet’s data-truths – flips the smart city value stack on its head. It’s light years away from Songdo’s rigid archaic delineation of work, rest and play. And it has nothing like the control that smart city advocates dream of exercising over how we use the spaces between these delineations.

It’s more than just an interface for a suite of smart services controlled from the comfort of one’s technologically integrated home. The design invites those who live, work or ​‘be’ there to use its public spaces, workplaces and housing to constantly create their own city.

King’s Cross Central is a vast, historically relevant urban stage, one set for scenes with narratives that play out in real time. It’s a place where the spectator is also the spectacle – such is the importance placed on the energy of the individual, the group, and the crowd.

Full to the brim with the messiness of ​‘the live’, it shows the life of a locally informed, living community. It’s different. It’s seductive. It’s jam packed with personality. It’s a real place.

78% of millennials would prefer to spend their money on an experience over an object.

TOWARDS A NEW SOFTWARE

The difference between Songdo and King’s Cross Central is simple. A smart city like Songdo consists of codes and templates for a hardwired entity that could exist anywhere. Its desired community is not defined as people breathing life into space, but rather by the curriculum vitae of specific skillsets.

In smart city speak, place activation is the software end of the design for any development, micro or macro – whether a local coffee shop or a vast, experimental city like Songdo.

Instead of starting with a master plan of a city’s hardware – its infrastructure and smart systems – start by looking at its software. Start with a strategy for finding out what people want; a master plan for experience.

Imagine the story of the development as the experience of the human. Design with that story in mind: employ the right people, pile resources into on-the-ground research, and introduce, test and refine the findings. From this, create a ​‘bible’ for all stakeholders, one that acts as meaning gel for all that will come.

Roger Madelin and his bike is a romantic explanation for King’s Cross Central’s success. No doubt his musings were brought to life by a large and able experience design team. But even so, he created a bible for subsequent development: the slim but relentlessly people-focused ​‘Principles for a Human City’ (2001).

From it sprung a new-old ​‘piece of London’, an exemplar for what it takes to birth, manage and complete a highly complex piece of urban planning.

Any doubts about the development’s ongoing success – and, by extension, any experience design – ought to be allayed by the following. Firstly, Google is moving in, drawn not to the site’s smart city credentials, but to the area’s vibrancy, its university and pool of graduates. And secondly, it’s where somebody called Yewon Shim, a 24-year old graduate from Seoul, has chosen to pursue her dreams.

The first of these, Songdo would kill for. The second: it has failed, for all the reasons why King’s Cross has not. 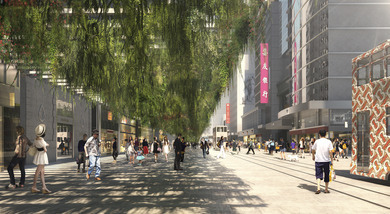 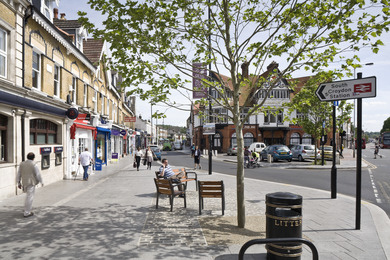