The 15% difference: the outsize benefits of a small amount of green space 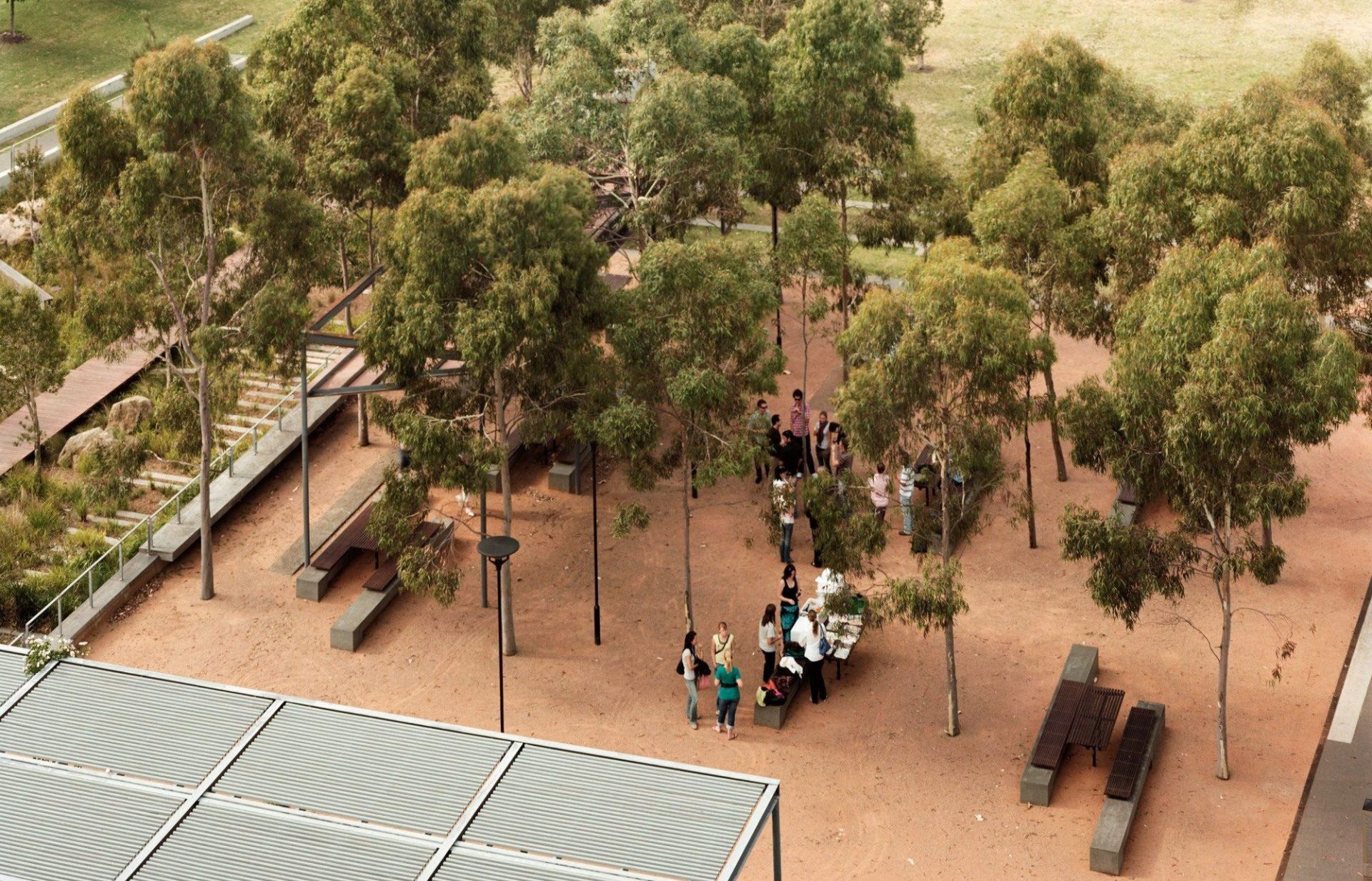 Decades after people first moved into Sydney’s Victoria Park neighbourhood, it’s clear their parklands - while just 15% of the site - have nurtured a community that’s going strong.

By Richard Mullane with interviews by Molly Peterson and photography by Max Creasy, Patrick Bingham-Hall and Guy Wilkinson

And for the next two decades, the parks - just 15 percent of the total plan area - were the vital ​‘glue’ for this medium to high density residential development on former industrial land in Zetland, an inner-city suburb of Sydney, Australia. When Simmone Kuit moved to the suburb in the late 1990s, she didn’t know she’d end up staying. She was a pioneer - one of the first people to the area - and didn’t know anyone else that lived there. Nearly two decades later, she speaks fondly of the neighborhood where she raised her daughter, now 16.

The parklands attracted them to the area - ​“knowing they were already established and they could never be built on” - and they’ve kept her family happy.

“We use the open spaces daily,” Simmone says. ​“Tote Park has a children’s playground, which we used daily as our daughter and the neighborhood children were growing up.”

“The open spaces encourage you to go out,” she says, describing the social value that parks add to high density living. ​“We formed beautiful friendships over the years.”

In the late 1990s, the New South Wales (NSW) State Government Land Commission began a shift away from the greenfields projects that had contributed to Sydney’s suburban sprawl. The Land Commission undertook its first urban housing development in Sydney’s inner South, a post-industrial area ripe for renewal. Victoria Park was to be the first higher density, urban infill development in the new Green Square precinct in Zetland.

The design of the public realm was a collaboration by Hassell and the NSW Government Architect, and the sandy soil of this former swampland forced innovation. Sharon Wright, current principal at Hassell, worked on the project while at the NSW Government Architects Office. She describes how the project set new standards for WSUD, with a design ​“driven by this idea of ​‘reimagining the swamp as street infrastructure’ ”.

“It really was the first project in Australia that installed streets and parks that worked like this - collecting, harvesting, cleaning and reusing water - and a lot of energy was invested just convincing people of this idea.”

Sharon says the primacy of the public realm design resulted in the well-established green spaces residents enjoy today. ​“We focused on getting four or more lines of tree planting into key streets to create heavily canopied future streets,” she says.

“The greatest thing about the project was that the streets and parks were built before people moved-in and they’ve gotten greener everyday since.”

“THE OPEN SPACE IS OUR BACKYARD”

Designers tend to wax lyrical about the importance of open space for building social ties in urban communities. But the proof is in the lived experience of residents.

Simmone describes the public space in her neighbourhood as very social. ​“The joke in our house is, we go to the shops to get milk, which should take seven minutes, but can take over an hour as you stop and talk to friends along the way.”

Another resident, Cassy Norris has lived in the Zetland area for ten years. She’s also made countless connections in its parks and green spaces. At the dog park alone ​“there are hundreds of people in there every day; there are so many friendships in that park that it’s extraordinary.”

Because most residents only have balconies, she says, ​“the open space is our back yard”.

“We’ve had many birthday parties in the park over the years and have always invited our neighbours.”

“There’s a park on every second corner and they all are part of the ecosystem here,” she says. ​“Each park has a function and they’re all available to all of us.”

When the weather’s hot, the established trees provide shade, she says. And the Joynton Park water sculpture, ​“while it looks lovely, is also full of children and dogs in the summer months.”

Her grandchildren love the nature areas. ​“I can’t tell you how many kids parties happen here where the kids are all hiding in the rocks and under the ferns.”

Cassy is also a member of Friends of Victoria Park, a group who’s applied for local government grant funds on behalf of local cultural and community groups. In this way, the parks have been the locus for a community that is active in shaping its own future aspirations.

“The spaces spurred people’s imagination around how they could lead and develop their community,” Cassy explains. ​“We were brought in as co-agents of community development and that was fantastic. And I constantly see benefits.”

“The park’s design has turned the problematic flooding conditions of the site into a dynamic and safe public landscape that celebrates water.”

A BENCHMARK FOR WATER-SENSITIVE URBAN DESIGN

Victoria Park was the first development in Sydney to showcase WSUD. The site was part of a large, degraded wetland and lagoon, and the design interpreted these natural ecological systems to achieve sustainable water management. Today, the industry commonly applies these design principles to improve water quality and reduce water demand in new developments.

The water management strategy is seamlessly integrated with the urban design concept. Drainage structures within the swales are combined with elegant bridge structures and an attractive median planted with a strong palette of native and endemic species. The wider landform is moulded to improve water retention, and a bioretention system regulates the quality of first flush water from public roads. 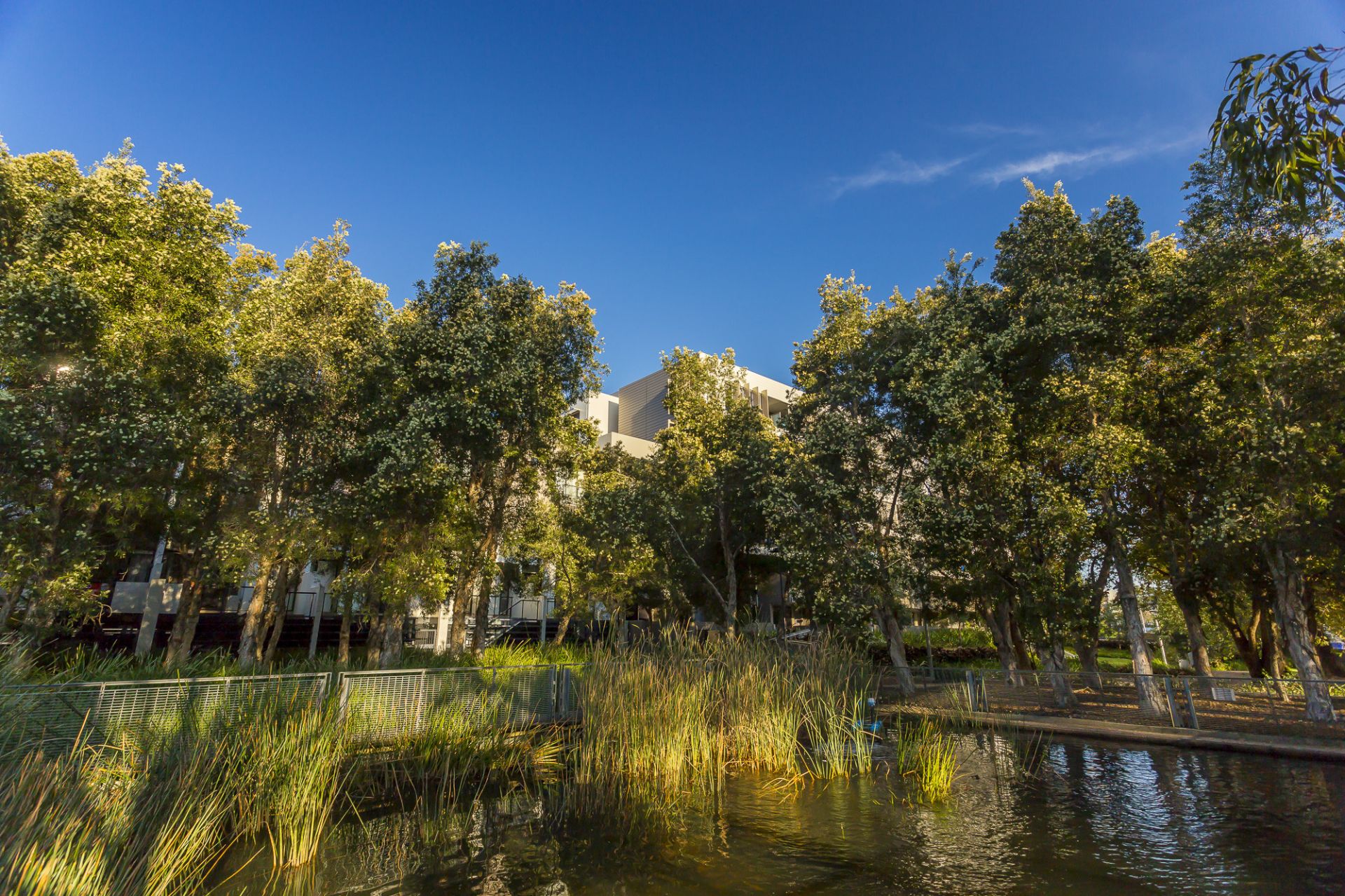 Dr Peter Breen is a professor with the Australian Government’s Cooperative Research Centre for Water Sensitive Cities. Peter collaborated with Victoria Park’s design team, advising on the WSUD aspects of the project.

Peter remarks at how effectively those aspects of the design stood the test of time, having revisited the site fifteen years after construction was finished.

“One of our research groups went and tested them, so did some infiltration testing and all that kind of stuff,” he says. ​“Still working fine after fifteen years.”

According to the professor, not every contemporary bioretention system is so enduring. ​“Either the plants have failed, or they’ve been clogged up, or all sorts of things have happened.”

The bioretention system also provides passive irrigation for the trees. Peter explains that they didn’t fully understand how beneficial this was back then.

“The subsequent work that we’ve done shows that in terms of canopy condition, if you can passively water a tree, the health of the tree significantly improves and the canopy and the life will be extended significantly,” he says.

“We didn’t know that at the time. But we did know about shade.”

Sharon also explains why Victoria Park’s passive irrigation system is integral to the success of its landscape architecture. ​“There’s none of the underground tree infrastructure that we would install on every project these days,” she says. ​“Just a tree in a tree pit, passively watered by the street - that’s it.

“Today, we’d struggle to be allowed to plant trees as close together as we did in Victoria Park, which created that incredible canopy.”

“Over the past two decades, Victoria Park in Zetland, Sydney, emerged as the most innovative example of integrated high-density living and water-sensitive urban design, opening up opportunities for other similar works.”

A PROTOTYPE FOR GOOD PUBLIC PLACES

Cassy is proud that her home is a prototype for good social and environmental place design, which means it doesn’t only benefit its residents.

“The success of this area (is) impacting the design of other successful areas like this in Sydney,” she says. ​“And there are lots of them that have been developed as a result of this model.”

But Sharon says that ultimately, it’s not the technical feats that speak to Victoria Park’s legacy. ​“The best thing is that people just love the parks and the feeling of living there,” she says. ​“The water system is just quietly going about its job in the background.”

Hassell has a legacy of restorative design for communities in Australia and Asia. Decades on, we return to a series of our projects to see the positive impact they’ve had on their environment and communities: Victoria Park and Millennium Parklands in Sydney, and Adelaide’s River Torrens.