Text and illustrations by Chris Kelly

Estimates vary on the number of species currently present on Earth. But a census conducted by Hawaii University concluded it to be 8.7 million species, although only 1.7 million are so far recorded. This incredible diversity is essential for a stable ecosystem and our continued existence on this planet.

We exist in a period of significant environmental uncertainty caused by humankind’s impact on the planet. The current rate of extinction is much higher than previously thought and may be accelerating toward what’s called the sixth mass extinction. A recent UN report, regarded to be the most comprehensive of its kind, says 1 million species are threatened with extinction within decades. It’s hard to fathom the impact of this statement.

Scientists believe there are 8.7M distinct species on earth, although only 1.7M are so far recorded. This year, the UN warned that 1M of these could be extinct within decades.

The report highlights the leading causes of biodiversity loss in land-based ecosystems and rivers – agriculture, forestry and urbanisation. Compounding these are unsustainable consumption and production, concentrated human populations, trade and technological advances, and governance across a range of scales.

For biodiversity, it’s critical to protect ecosystems and the large areas they occupy. As biologist Ken Thompson proposes in ​‘Do We Need Pandas?’ if we conserve natural areas, we also protect biodiversity.

As urban designers, we can challenge the status quo of urban development to create positive change on specific issues. Hassell did this in a recent competition-winning master plan for the western Chinese city of Chengdu. The Sichuan Province location forms the world’s most significant contiguous area of panda habitat.

We looked to support the giant panda’s conservation by controlling over-development and encroachment of its natural habitats. Our design left sensitive areas intact for responsible economic development. It also aimed to increase public awareness of conservation issues. We examined the giant panda’s broader role in Chengdu as an icon to promote the city’s brand identity and tourism.

The giant panda is what conservationists term an umbrella species. This refers to a conservation strategy that focuses on protecting the habitat of one species to protect many others in the same ecosystem.

These species might not otherwise get the public or political attention to support their conservation. The giant panda’s global profile helps raise funds to protect these co-occurring species and habitats.

This strategy is not without its challenges. Picking the right umbrella species and the area they inhabit is critical for the approach to be successful.

“Like all things in ecology, it’s not as simple as it looks.”

It’s also a balancing act. When you increase awareness, you also build interest and drive tourist numbers. ​“Tourists don’t think they have an impact on panda habitat, but each visitor has some impact,” says Dr Liu of Michigan State University. ​“They come, they take their summer vacations there and stimulate the local economy, but this in turn uses more local natural resources.”

A FRAMEWORK FOR CONSERVATION, EDUCATION AND POLITICAL INCENTIVE

Considering these competing requirements, we defined a framework to align our thinking with the project’s aspirations.

We connected the panda’s conservation, surrounding habitat restoration, political incentives and the custodianship of future generations.

We unified the framework’s principles into a simple but powerful message: The Panda Trail – Explore, Discover and Dream. We applied strategies to unlock the potential of each of the three key sites to contribute to conservation, education and awareness.

Dujiangyan is a UNESCO World Heritage Site that sits west of Chengdu. Nearby is an ancient irrigation system constructed around 256 BC. The land is prime natural habitat for the giant panda and other endemic species. It’s also where pandas bred in captivity are released into the natural environment to develop survival instincts.

Recognising the environment’s sensitivity, we placed restrictions on tourism and movement through the site. Our aim was to safeguard habitat and contain activity. Limited numbers of tourists could be explorers, a message that aligned with habitat preservation. We segmented the target visitor group that would best respond to this site to prevent oversaturating the reserve area.

The second site, Beihu, is near the city centre and contains very different opportunities. Its proximity to local communities and makes it an ideal site to engage and educate people on local conservation issues. We crafted purposeful journeys that showcased local flora and cultural displays.

Renowned zoological specialist, John Coe, provided advice to support the design of habitat areas. We were keen to reframe the role of these animals in visitor’s minds. We designed the enclosures so that the animals were either level or elevated, to subvert the idea that humans are dominant over nature.

The final site location to the city’s east is a gateway site. It will connect the future airport as the global front door to Chengdu, showcase awareness raising efforts, and provide political incentive for conservation.

We used this site as a mechanism to show how sensitive development can occur through the integration of blue and green systems as well as frameworks to restore the surrounding landscapes. This site brought together many ecological aspects and aspirational elements to support the city’s future.

Through this project we aimed to create greater awareness and exposure for these global issues, but in a coordinated and targeted way. We leveraged the intrinsic and local values of each site and aligned them to specific objectives of conservation, education and political incentive.

Whether designing for protected habitat areas, or for curated journeys for tourism, or supporting broader city positioning and identity to help with continued fundraising for the giant pandas and as a consequence support the regeneration and preservation of critical areas of habitat.

Hassell is committed to working on the biggest global issue of our time – climate change. Solutions rely on global thinking and collective action across a range of scales – from governments to individuals.

Chris Kelly is an Associate based in our Sydney and Shanghai studios. 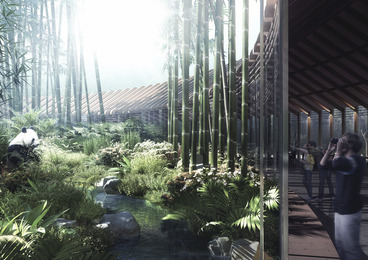 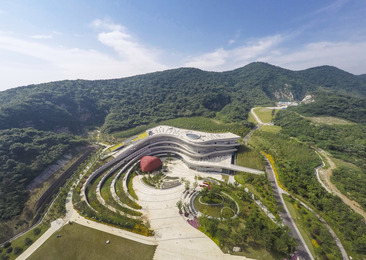 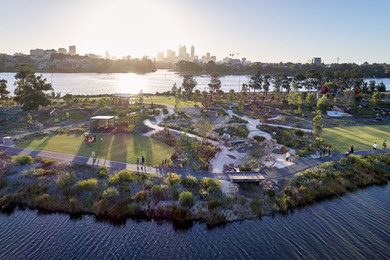